Protest organizers say the students arrested were Dulce Guerrero, 18; Jessica Vasquez, 18; Rolando Zenteno, 16; Nataly Ibarra, 16; Felipe Baeza, 24; and Leeidy Solis, 16. The organizers say all are Georgia residents and high school students, with the exception of Baeza, who lives in and recently graduated from college in New York.

"I am so happy to do this because we need to stand up for what we believe," Ibarra, a senior at Pebblebrook High School, said before being arrested. "I am tired of having to live in the shadows.".

Today's protest comes several months after more than 100 protesters  including seven undocumented students  urged Georgia State University not to comply with a law that prohibits undocumented immigrants from attending some of the state's most competitive public colleges. The seven youths were arrested after sitting in the middle of Courtland Street but were not deported.

A federal judge yesterday temporarily blocked parts of Georgia's law that penalizes people who aid or transport undocumented immigrants or fail to verify whether employees are authorized to work in the United States. The state says it will appeal the decision.

UPDATE 5:18 p.m.: A spokesman with the Georgia Department of Public Safety, which oversees the Capitol Police, says in a statement that the six were arrested "after blocking the intersection by sitting in the roadway and failing to disperse." All six are being charged with with reckless conduct, obstructing law enforcement, and obstructing a street.

The three adults  Baeza, Vasquez and Guerrero  are being transported to Fulton County Jail. The three juveniles will be released to their parents "with copies of the charges for Juvenile Court proceedings." 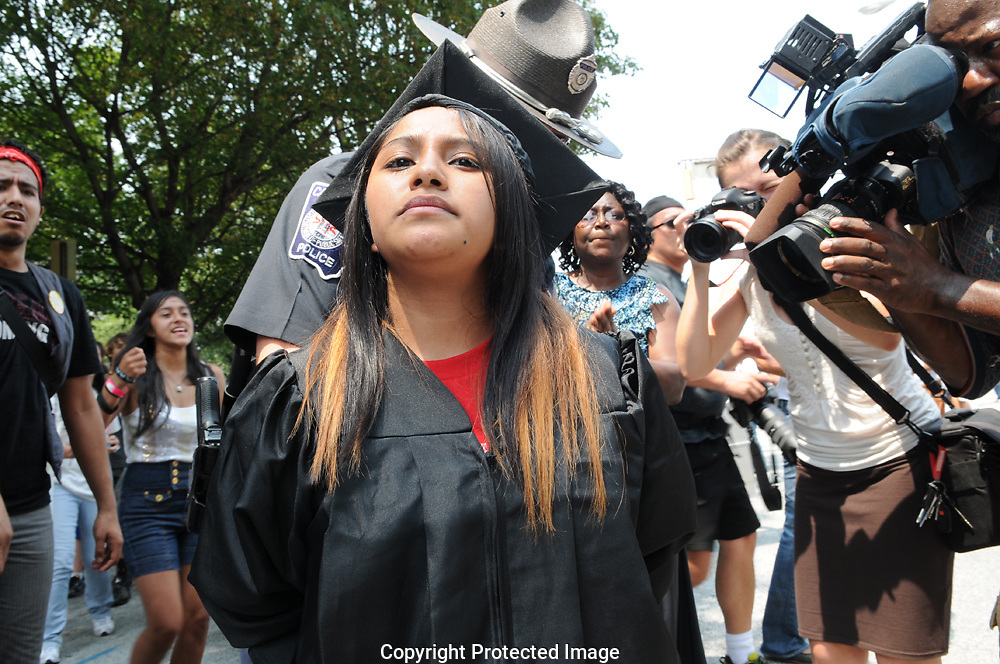